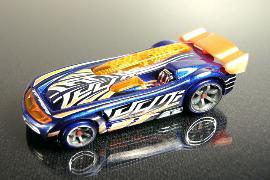 Hot Wheels Battle Spec is a 1/64 scale die-cast toy car from the original 2005 Hot Wheels Acceleracers series, and is car #5 of the Teku line and # G8088 in the Hot Wheels collection. The Metallic Blue colored Battle Spec sports White, Orange, and Black flames and was designed by Mattel Designer Eric Tscherne. The Battle Spec was made in 15 different versions from 2005 to 2016.

Acceleracers Battle Spec has a carbon fiber monocoque. The car is powered by a 420HP of torque aluminum 2.2L four-cylinder with a DOHC performance camshafted turbocharged engine with 440ft/lb of torque in the center front of the car, hooked up to a 7-speed transmission. The right side of the car are intakes for the four-cylinder motor, the JT-10 turbo on the exhaust, and intercooler pipes. The intercooler is mounted on the bottom of the chassis, taking air from the front intake to the hood outlet which creates a vacuum that forces air faster through it and is forced even faster by the top intake. In the movie AcceleRacers, Kurt Wylde built this car after his Slingshot was destroyed. It was built on the Power Rage’s chassis.

In the Acceleracers cartoons, the car is driven by Kurt Wylde.

All cars sold on the Hot Wheels Acceleracers site are guaranteed to be brand new but have been removed from their original packaging.

Cars are sent out to Purchasers verified addresses by First Class US Mail to locations in the continental United States and Canada within 48 hours of purchase.

Teku consists of 9 different models and is part of the Acceleracers series of Hot Wheels Toy cars manufactured by the Mattel Toy Company in El Segundo California. Acceleracers were introduced by Mattel in 2004 and were distributed through retail sales as part of a promotion by McDonald’s and Warner Brothers.

Other Acceleracers cars sets manufactured by Hot Wheels include Metal Maniacs, Racing Drones, and the Silencerz.