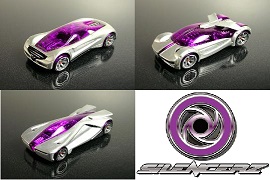 FREE CAR WITH EVERY SET

The Classic cars in this set are from the original 2005 issue of Hot Wheels Acceleracers Silencerz toy car issue. The 3 cars we are selling together as the Silencerz Set includes the following:

Nitrum is car #2 in the Silencerz series and # G8118 in the Hot Wheels Collection. The Nitrum was made in 11 different versions from 2005 to 2015. The Nitrum sold with this set was issued in 2005 and is painted metal flake silver with a black grill and blue window. This car was featured in the Hot Wheels Acceleracers movie.

Iridium is car #4 in the Silencerz series and # G8119 in the Hot Wheels Collection. Iridium was made in 14 different versions from 2005 to 2017. The Iridium sold with this set was issued in 2005 and is painted metal flake silver.

Anthracite is car #3 in the Silencerz series and # G8125 in the Hot Wheels Collection. Anthracite was made in 11 different versions from 2005 to 2016. Anthracite sold with this set was issued in 2005 and is painted Metallic Grey.

The Silencerz Car collection consist of 9 different models and are part of the Acceleracers series of Hot Wheels Toy cars manufactured by the Mattel Toy Company in El Segundo California. The Acceleracers were introduced by Mattel in 2004 and were distributed through retail sales as part of a promotion by McDonalds and Warner Brothers. Other Acceleracers cars sets manufactured by Hot Wheels include Metal Maniacs, Teku, and the Racing Drones.

Silencerz is a line of 1/64 scale die cast toys from the Hot Wheels Acceleracers car series. The other lines in the Acceleracers series are the Metal Maniacs, Teku, and Racing Drones.

The 3 car set being sold here are the Nitrum, Iridium, Anthracite and Accelium.

All Hot Wheels Acceleracers sold on this site are guaranteed to be brand new, but have been removed from their original packaging.

Cars are sent out with free shipping to the continental United States with 48 hours of purchase.